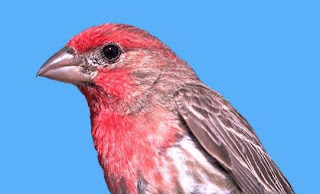 "Then, as I watched, the Sparrow slowly opened its beak. A huge void appeared. And within the beak was a vast yellow vortex, more dynamic than the sun, unbelievable.
This isn't the way it happens, I thought again.
The beak opened wide, the Sparrow's head moved closer and the blaze and the blare of yellow swept over and enveloped me". 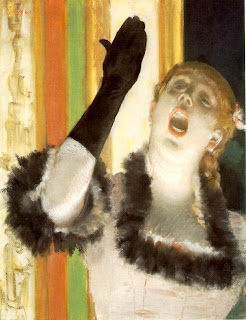 A partir de The Café Singer (1878, Degas) Adam Golaski escribió un texto que apareció en el McSweeney's Quarterly Concern #19. Este es el final:
"She looked down and smiled through her song. She raised her hand and opened her mouth wide for a long note and from her mouth emerged --as from a hole in a tree-- a bird. The bird, red, wet from the woman's throat, pushed itself from the woman's mouth and flew up, hovered above the woman's head, flew away".
Posted by Guillermo Núñez at 12:32 PM